Coffee and bright ideas? They go together like a horse and carriage … 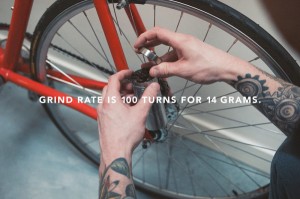 The grinder has a 20-gram capacity and takes 100 revolutions of the wheel to grind the coffee – about 600 metres depending on the wheel-rim size.

Co-creator Dan Hill says: “As far as I’m concerned this is up there with the discovery of fire and the creation of the internet in its value to the people of earth.”

More on this story 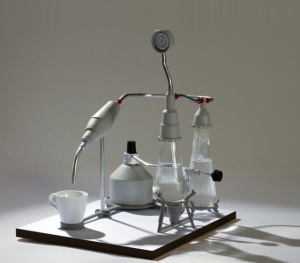 There could be more pics on Designboom

3. Hands-free Aeropress – with a twist

Brewbar is a mobile coffee van in Coventry in the UK. The Brewbar crew like to bring some “wow” factor to events – especially with this almost-hands-free two-at-a-time Aeropress thingy.

They travel in a customised H van and also set up a geodesic coffee dome.

Here’s a video of the hands-free Aeropress machine in action.

What do you get when you combine a pedal-powered coffee grinder, a tricycle and a gas-fired lever espresso machine? Low-carbon coffee wherever a bike can go, say the designers of the Velopresso, which won a Deutsche Bank design award in 2012 and is now in production in east London (of course).

This one will take some explaining … Amsterdam-based Frans Goddijn combined a Bialetti moka pot with a vintage German laboratory hotplate and some heat sensors and monitors to make what he reckons is the perfect stovetop espresso.

The lab hotplate – a Retsch RühroMag MH12 – contains a rotating magnet that turns a small piece of metal Goddijn inserts in the Bialetti’s water chamber, agitating the water and, he says, making it heat more evenly. 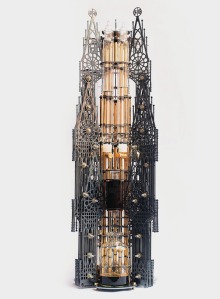 An architect, an industrial designer and a graphic designer walked into a Korean coffee bar … and this fantasy cold-drip brewer was the punchline.

The designers and the coffee bar owner call themselves Dutch Lab, and they have produced a whole architecture-inspired range of high-end cold-drip coffee brewing apparatus.

From the good folks at Google