The office of the sindaco in the Commune of Scicli

A narrow, potholed road winds between low dry-stone walls around the hillsides, climbing above steep ravines; the fields are the colour of parched straw and burnt umber, and dried thistle and wild fennel wilt in the summer heat beside the tarmac.

The landscape is dotted with outcrops of the same pale grey limestone that is piled up into the walls. Groves of dark-green, ancient olives and bright green and less ancient almonds dot the hillsides, the sky stretches cloudlessly from horizon to horizon, and the sea is a hazy deep blue in the distance.

Dusty trucks are pulled over into unsealed side roads where dark-skinned men in overalls perform tasks whose nature you cannot precisely discern. Cars accelerate suddenly into the rear-view mirror before shooting past, and fly around blind bends on the wrong side of the road. You feel like you’ve wandered into a mafia telemovie …

In fact, you have, sort of: welcome to Montalbania, the corner of south-eastern Sicily better known as the province of Ragusa, and home to many of the locations that feature in the popular Italian TV policier Inspector Montalbano, based on the novels and short stories of Andrea Camilleri.

Vigata, the town where the sharp and principled Montalbano works, is a fictionalised version of Porto Empedocle, further to the west near Agrigento, where the mafia gained a foothold in the 1990s after being chased out of Palermo. The TV series transfers the locations to the more picturesque, if less squalid, surroundings of the baroque cities of Modica, Noto and Ragusa. 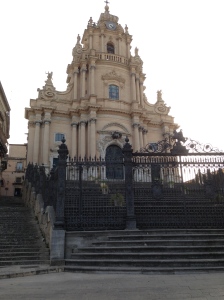 A catastrophic earthquake in 1693 levelled these hilltop cities; they were almost completely rebuilt in the following half century, with the houses, public buildings and especially churches featuring elaborate balconies, columns, cornices and fluting carved from the soft local limestone, and in recent years restored to glowing pink and gold after a couple of centuries of accumulated grime.

Many of these spectacular buildings feature as backdrops in the Montalbano telemovies, which were screened over four seasons on SBS and are now available on DVD.

The small town of Scicli – about half an hour south of Ragusa – plays the role of Vigata and is home to one of the main sites for pilgrims on the Montalbano trail. The town lies at the end of one of those winding, stone-walled roads, and rounding a bend you see it suddenly laid out along the floor of a valley and climbing three neighbouring hills, each crowned by a church.

In the town’s Palazzo del Municipio – the headquarters of the local council – the office of the mayor doubles as the office of questore Bonetti-Alderighi, the chief of police in the fictional  provincial capital of Montelusa, and Montalbano’s boss.

Montalbano, played by Luca Zingaretti, is regularly summoned before the office’s large glass-topped 19th-century writing table, below an ornately framed allegorical painting, to get the benefit of the chief’s misguided wisdom on a case. The two argue in the Sicilian way where they appear to be agreeing, before Montalbano follows his instincts and solves the crime: the chief is a politician, Montalbano a real “sbirro”, or cop.

The mayor of Scicli has twice had to vacate the office: at first temporarily, when early series were in production; now permanently, as the local council offers guided tours of the room for €2 a head.

The officeoccupies a large salon on the second floor, right in the middle of the building, above the double entrance at the top of the central staircase, with a balcony looking over the piazza.

The mayor of Scicli has twice had to vacate the office: at first temporarily, when early series were in production; now permanently, as the local council offers guided tours of the room for €2 a head.

The guide, a smart young employee of the council, delivers her brisk patter about the production of the series and the history of the building as you stand before the desk, pointing to the door through which Montalbano enters the room (“Not the one you have just come through,”), noting that the dark 19th-century furniture was all purpose-made, and features Scicli’s crest. You can’t help feeling a little sorry for the mayor, exiled from this space full of the pomp of office – the flag and star of the Italian Republic, the painted ceiling, the lustrous dark timber, the lounge chairs and coffee table in one corner – and now working from a much more humble room in another part of the beautifully kept building.

As the guide notes, the building’s facade serves as the exterior of the police station at Vigata, where Montalbano and his detectives arrive and depart in tiny Fiats with tyres screeching – inside you’re in Montelusa, outside in Vigata, a little postmodern trick of the television.

The piazza is filled with the tables of a local cafe, packed away, along with everything else, when the series is in production during winter, and locals are under strict orders about where they can and can’t set foot so they don’t interrupt filming. As we sat over short blacks imagining the piazza as it appears in the series, two Carabinieri wandered over in their distinctive blue shirts and red-striped trousers, as if they had stepped out of the fictional police station for a quick coffee themselves.

Terrace of the Castello di Donnafugata, near Scicli

On the road from Scicli to Ragusa is the castle of Donnafugata, a grand mash-up of arab, Norman and 19th-century architecture that doubles as the villa of Don Balduccio Sinagra, a retired mafia boss who summons Montalbano to a meeting on the castle’s broad terrace to offer him a veiled lead – or is it a red herring? – in a murder case.

The castle loaned its name – a Sicilian corruption of its Arabic name,  Ayn as Jafat (fountain of health) – to the castle in Lampedusa’s novel The Leopard, coincidentally also set further west near Agrigento, and its elaborately painted and wallpapered rooms – including a deep red and gold-trimmed salon reserved for the bishop – evoke the fading opulence of that classic novel of the last days of the Sicilian aristocracy.

Donnafugata is the point where popular representations of Sicily appear to all converge: the castle’s farm buildings were also the location for “The Jar” episode in the Taviani brothers’ 1984 film about Sicilian life at the end of the 19th century, Kaos, itself based on a series of short stories by the Sicilian writer Luigi Pirandello.

In nearby Ragusa you find the church of San Giorgio, a baroque beauty set at the top of a sweeping staircase; it features in numerous episodes as the church of Vigata, with Montalbano meeting people on the staircase after various funerals and weddings. But the gated steps are sometimes closed off – you may have to content yourself with an aperitif at a cafe table in the sloping piazza in front of the church.

Perhaps the most popular Montalbano site, though, is the house at Punta Secca where the inspector “lives”.

Punta Secca is a pretty little seaside holiday town, and the casa di Montalbano – helpfully signposted by the local council – sits right on one of its beaches. You can walk up and peer into the balcony where the good inspector entertains various women – witnesses and suspects both – over moonlit bottles of the local red, nero d’Avola. Women pose coquettishly for photographs on a low wall with the house in the background, perhaps imagining themselves on that moonlit balcony (the shaven-headed Zingaretti, with his soulful lost little boy’s eyes, is quite a sex symbol in Italy).

The house now hosts a bed and breakfast – you can sleep in Montalbano’s bed and drink coffee on the terrace where Montalbano drinks coffee after his morning swim (which is actually filmed at another beach. Such are the demands of TV locations).

But with locals using the downstairs balcony as a towel rail and crowding the beach on summer days, you’d have as much chance of peaceful enjoyment of the house as the famously harassed inspector himself. Which might mean entering just a little too deeply into the fantasy.